Commuting to Work: How far is too far?

Many of us commute to work – but how far is too far? This month Forward Role have been asking our candidates, clients and connections how far they would be willing to commute for the perfect role, and it shows some remarkable results.

Question 1 – How far would you be willing to commute for the perfect role? 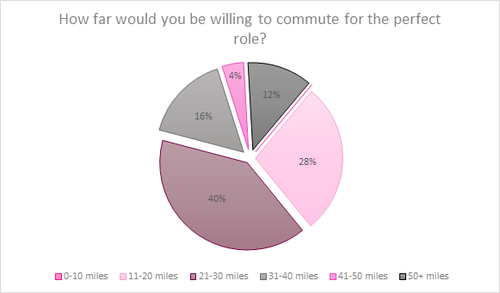 The pie chart above shows that the majority of people (c40% ) would be willing to travel between 21-30 miles for their perfect role (and over 72% would travel 21 miles or more), which is encouraging for employers who want to try and find the best candidates for the job regardless of distance.

I was a little surprised that only c16% of people would be willing to travel 41+ miles for a ‘dream role’. There are lots of things to consider when it comes to your length of commute; travel costs, traffic and spending long hours in the car all detract from time spent with family, opportunities to go to the gym or relax at home.

However, if you were offered the perfect career defining role, wouldn’t travelling slightly further than your ideal be worth the sacrifice?

Question 2 – How long does you current commute take you? 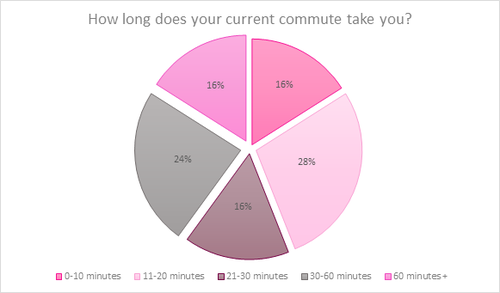 The results for this question were pretty evenly spread.  On a positive note the vast majority of us spend less than an hour getting to and from work.  The biggest segment was a journey of between 11 and 20 minutes and it took c16% of people less than 10 minutes, which might be explained by the increase in city centre living in the region.

Question 3 – Would you like to occasionally work from home? 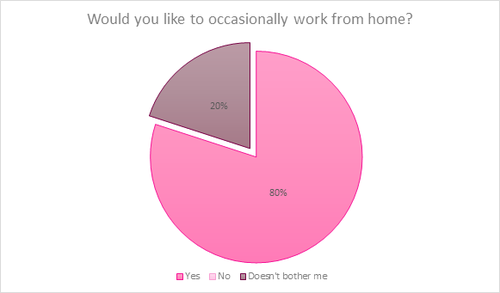 It comes as no surprise that c80% of respondents would like the flexibility to work from home, while c20% claimed that it doesn’t bother them. Unsurprisingly, not a single person said they wouldn’t like to work from home. It would seem everybody would like the option to occasionally log on to their laptops and kick back on the sofa every now and again. Many of our candidates feel that a day a week working from home helps them break the daily grind of the week up and actually allows them to be more productive. A common case for the defence of home working that we hear from marketeers is that by removing themselves from the office and being in a more relaxed environment, away from interruption allows them to be more reflective and think more strategically.

Question 4 – Does your current employer allow working from home? 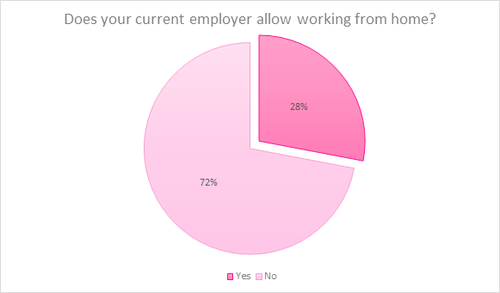 According to our results, a massive 72% of current employers do not allow their employees to work from home. In comparison to the amount of respondents who would like to option to be able to occasionally work from home, this shows a big conflict in opinions between employees and employers.

At Forward Role we have a decade of experience in helping people find their next career move, and during that time the technological landscape has changed a great deal; creating more opportunity for people to work just as effectively remotely.

There are many factors that candidates consider during their job search, but location and the commute to work can be a deciding factor.

Increasingly this will become an issue which gives firms who do allow more flexible modes of working a competitive advantage in the fight for the best talent in the region. For businesses where there is a shortage of the core skills that they are reliant upon for growth such as digital, then they need to ask themselves if they can afford not to include home working when so many candidates are demanding it.

I’ve experienced a different attitude to commuting to work in the US where because of the greater geographical spread, commuters think nothing of 4 or 5 hour return commutes a day. A friend of mine who travels for 2-3 hours each way in Minnesota thinks we are “soft” in the UK.

It’s the same in Australia where our Creative Consultant and Melbourne native, Michael Twist, claims that commuters would regularly travel huge distances to work each way in Australia.

Maybe with the introduction of the new high speed railway, more North West candidates will commute down to some of the big brands such as Google in London?

Let us know what you think. Are we too spoilt in the North West when it comes to commuting or have we got our work / life balance just right?

Thank you to everybody who helped us by taking part in this survey. For more information on working from home, take a look at Guy Walker’s blog from last month.

Stephen Thompson is the Managing Director of Forward Role and has recruited Digital, Analytics, Marketing and Creative people in the North West for over a decade. He has advised a number of large North West clients this year on their engagement and remuneration strategies, to help them not only target the best talent for their business but also retain them. For a selection of the latest jobs in the region please visit www.forwardrolerecruitment.co.uk