Guerrilla Marketing: The good, the bad and the downright disastrous

Back to Blogs
posted about 7 years ago By Emma Allison

Guerrilla Marketing: an unconventional strategy that is designed to take consumers by surprise as they strike them at a personal and memorable level, earning a company a reputation of being fun, creative and different. Done well, it creates a social buzz and makes a lasting impression, encourages word-of-mouth and produces maximum results by reaching large audiences at a low-cost. So, that reverse graffiti you’ve seen advertising Liverpool One shopping centre whilst eagerly wondering the streets of Liverpool on the hunt for all four of The Beatles is a form of guerrilla marketing!

Although you may not realise it, you are exposed to marketing every day as companies take their brand to consumers and incorporate it into their daily routines. It could hit you in the face at any time - when you’re out and about shopping, taking the kids to school, or on the bus - without even realising it.

Below, I have selected some of my personal favourites that really packed a punch and got chins wagging!

The feud between the two German vehicle manufacturing brands Audi and BMW started when Audi erected a billboard showcasing its ‘entirely new Audi A4’ with the line ‘your move, BMW’. Not one to take such thing lightly, BMW fired back with a bigger billboard placed next to Audi’s with a picture of their 3-series and the caption ‘Checkmate’. The point-scoring was shot back and forth once more until BMW settled the feud by flying a zeppelin attached to Audi’s R8 board with a picture of their F1 car and the words ‘Game Over’. However, something tells me this isn’t the last we’ll see of this school-like behaviour from the two car giants. 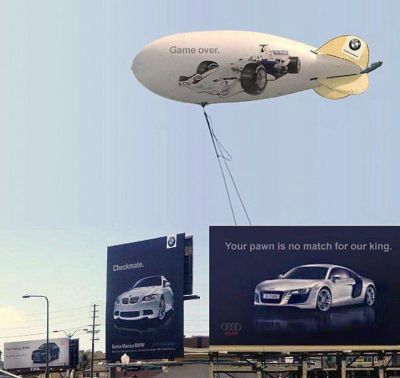 Bounty prides itself on being super absorbent. They played on this by creating an advertising campaign in New York which involved a six foot tall coffee cup being split over in the street, complimented by the aroma of freshly brewed coffee and steam. In LA, the same approach was taken but with a seven foot giant ice lolly melting onto the pavements in the street. Both were accompanied with the slogan ‘Makes small work of BIG spills’. 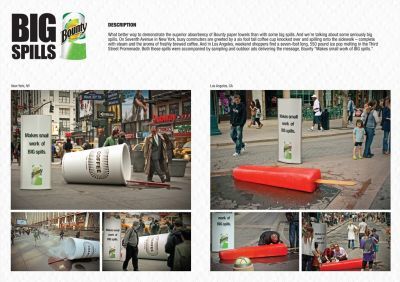 To prove that their security glass was unbreakable, 3M placed thousands of dollar bills in a bus stop and challenged passers-by to break it. If they were successful, they could keep the money. Nobody managed to do so, proving the product’s functionality and that people will risk looking like a complete wally whilst taking a run and dive into the side of a bus stop! 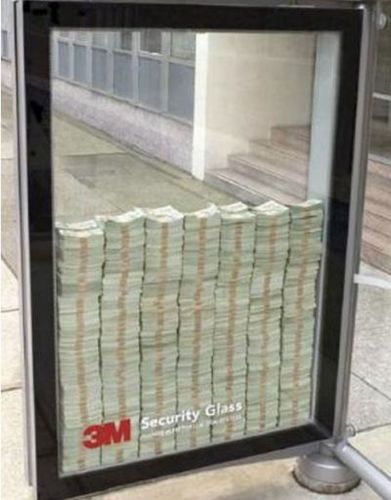 However, not all campaigns always go to plan:

On January 31st 2007, what started off as a marketing campaign to promote a new film turned into a Boston-wide bomb scare. Turner Broadcasting placed LED placards in the shape of a character from the film throughout Boston in random locations. At night the placards lit up and resembled characteristics of explosive devices which caused the panic.

Turner Broadcasting accepted full responsibility and were ordered to pay $2million in fines. Whilst this would be dubbed a disaster by many, the story was picked up by major media networks which led people to know about it, although not in the way that was planned! 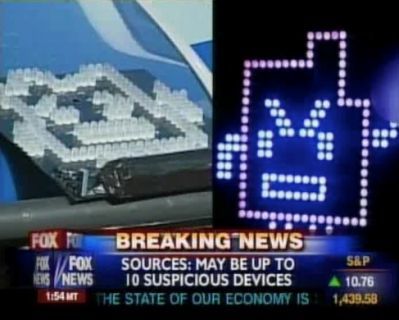 Vodafone hired two male streakers to interrupt the 2002 Bledisoe Cup Match (an international rugby game to all us non-sports enthusiasts) with nothing but the Vodafone logo printed on their backs. Many viewed it as disruptive and fans were angry as the stunt caused a game-winning kick to be missed and Vodafone faced legal action. Oh dear!

But guerrilla marketing isn’t just done offline, there are online forms too. Take blogging, for example. ‘Piggybacking’ on current industry topics and events and blogging about them with an interesting or shocking twist can be a really effective tool in creating great viral marketing. The same can be said for thoughtful, creative or funny viral videos. Remember the ‘Charlie bit my finger’ video on YouTube which generated nearly 400 million hits worldwide? Well, it’s not surprising that a company named Aptamil took advantage of this and placed banner ads down the side of the page to promote their baby milk product.

Whatever method a company chooses to advertise their brand and products, the rise in social media and the power of the consumer means that they must create advertising campaigns that are worthy of being shared. One of my favourites is Coca Cola’s Happiness Machine guerrilla marketing campaign which they launched globally in countries such as the USA, UK, UAE, Sweden, India, Philippines, Pakistan, Indonesia and Japan, with over 20 million views on YouTube combined, it was a campaign worthy of being talked about!

So, whether you prefer contemporary or traditional marketing methods, contact our team at Forward Role for some friendly career advice or a chat about a new opportunity or to check out our latest jobs visit http://www.forwardrolerecruitment.co.uk/job-listing/

Comment below and have your say on what you think is the most effective or memorable guerrilla marketing campaign you have seen to date is.