The Forward Role fantasy premier league got off to an unpredictable start in August, with some new faces at the top of the table.

Rob Illidge of Elrelo.com is currently leading the way with 187 points; ahead of Phil Jones (is that the ‘Brother’ Managing Director steering a successful team, the Man Utd footballer himself or Phil Jones from Sure Group – will the real Phil Jones please stand up (or let us know))?

New city centre car finance marketing department Zuto have a representative up in 4th in the shape of Tom Singleton (we like his Balotellitubbies team name too!). He leads ex BPP Professional Education colleague and serial fantasy underachiever Steve Gaughan by three points in 7th.

Biggest story of the year is last year’s relegation contender Vicky Betts from Missguided up in 5th, only a couple of points ahead of Anna Woodward our second placed lady at EasyOdds. Vicky wins our earliest gloater of the season award for sending a screen grab of her team in 1st after Saturday’s matches!

Egg Chaser Brian Johnson leads the Forward Role contingent in 12th and last year's champion (my good self) is stuck down in 38th. I will be blaming a three week honeymoon and Wayne Rooney for my slow start! No excuses from here on in though….

It would be great to see some more familiar faces in the league, so please share with colleagues and on social media. The league code is 967650-236379. The winner will be sent a mystery booze hamper at the end of the season and plenty of shout outs for their expertise throughout the season….

Good luck for September everyone! 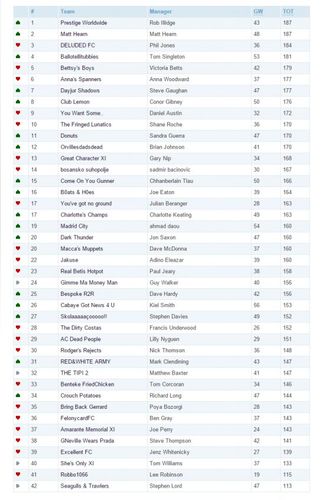