Back to Blogs
posted about 4 years ago By Emma Allison

This Wednesday is Halloween! For many people, it’s a day that conjures up images of scary costumes, Jack-o'-lanterns and trick or treating.

But for someone who’s just landed a new job, Halloween could be a scary time for other reasons; saying the wrong thing to your colleagues, showing up late on your first day, or even the fear that maybe you’re not good enough for the job.

In the run-up to Halloween, marketing, digital and technology recruitment agency Forward Role took to Twitter to find out what people were most nervous about when starting a new job and how best to face your fears. 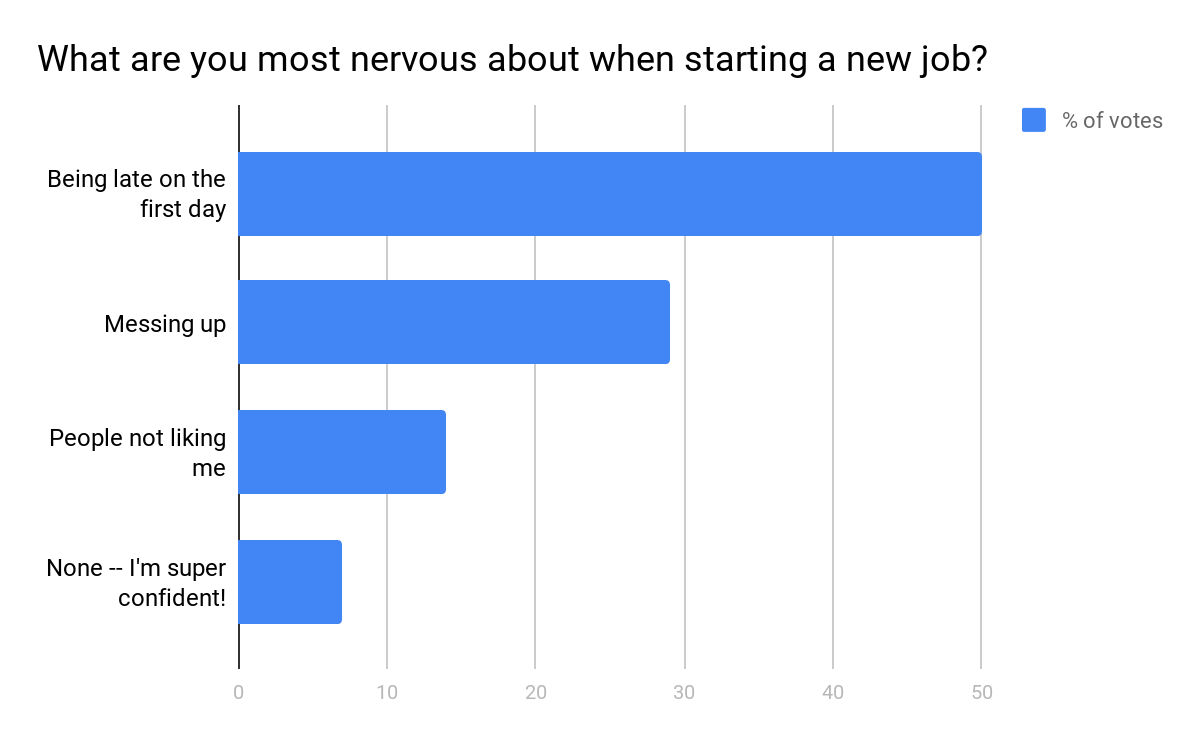 While being late on the first day and messing up at work were concerns that the majority of people seemed to have, only a handful of respondents said they weren’t worried at all. Clearly, the new job jitters is an almost universal feeling.

However, facing your fears might be one of the most important things you can do when starting in a new role. Brian Johnson, Director at Forward Role, says: “Starting a new job is one of the biggest life changes you can make, so it’s no wonder that people can fear the worst. Luckily there are some great ways to combat those first day worries, that will allow you to enjoy the experience of starting a new role as much as possible.

“We’ve put together our ultimate success guide for conquering your deepest fears on that first day in your new job so that you can come out on top.”

This is the fear that topped Forward Role’s poll, and it’s a fairly rational one; with any new job, it’s unclear how long it might take for you to get to the office.

It’s a good idea to reduce the risk you’ll be late on your first day by doing a test run of your commute in advance. That way, you get an idea of which routes to avoid due to the rush hour traffic, or whether that 3-minute transfer between trains is actually long enough.

However, you might still hit standstill traffic on your first day, or your train could be unexpectedly cancelled. If you do happen to be running late on your first day, the most important thing to do is to communicate. Speak to your new company’s HR department before you start to make sure you have a number you can call in the case of a delay and let them know in plenty of time.

This is probably one of the biggest fears we all have on the first day of a new job but put into context, it’s a bit of an odd one. After all, on your first day, you'll probably get introduced to a lot of people, so there won’t be enough time for anyone to gather a solid understanding of who you are.

That said, first impressions do count, but thankfully, it’s pretty easy to introduce yourself well. Be polite: it’s always safer to treat people formally at first and adjust how you speak to them as you learn more about them. Also, don’t forget to smile, even if you’re nervous. It’ll make you approachable and increases the likelihood that other people will get a good first impression of you.

If you want more advice on creating a good first impression, check out this great guide on how to introduce yourself by Kara Cutruzzula.

“What if I wear the wrong thing?”

If you’re not sure of the dress code, dress formally. It’s always better to be overdressed than underdressed: it shows that you care about coming across professionally.

Even if you’re pretty sure that the dress code is pretty casual, double-check with your new HR manager in advance. Leave nothing to assumption and there’s no chance of you missing the mark.

“What if I don’t know what’s expected of me?”

When you start in your new role, it’s normal to feel a little out of your depth, since you won’t be used to the way the company works yet.

However, it’s not okay to feel unsure of what’s expected of you.

Organise a meeting with your manager as soon as possible to go through any questions you might have. Write them down in advance and take them to the meeting: it’ll show your new boss that you care about using their time effectively.

Not only does this help you get clarity on specific questions you might have about your role but it also encourages your manager to be more proactive in being clear in future, saving you both a lot of hassle in the long run.

It might not sound very reassuring, but the truth is this: we all mess up at some point. And unless you’re working for robots, the people you work with will have messed up too.

You should embrace failure early on; otherwise, the fear of failure will make you hold back. By holding back, you limit your ability to be creative, which ultimately puts a cap on what you’re able to achieve.

Embracing failure stops you from playing it safe, so you can bring value to your new company.

“What if there are unspoken rules I don’t know about?”

Every company has its little quirks. You won’t be able to figure them all out at once but you can accelerate the rate at which you learn them by asking your colleagues.

For example, you might notice a pattern in who gets teas and coffees in and when they do it. Rather than wait a few weeks to figure it out for yourself, ask someone in your team what the deal is. That way, you turn an unspoken rule into a spoken rule and there’s one less thing for you to worry about.

“What if I’m not good enough?”

This is probably the biggest, deepest fear you’ll have going into a new job.

It can come from all sorts of places. We live in a time when imposter syndrome — the feeling that your success is down to luck, not skill — is rife, so one of the best ways to get past this fear is to sit down with your CV or portfolio before you start your new job and read through it. You’ll remind yourself of all that great stuff you’ve achieved previously, and that you impressed your new employer enough to land the role.

Alongside this little confidence booster, you should ask for feedback constantly to catch any small errors you habitually make and nip them in the bud. Asking for feedback shows a desire to improve; it indicates to your new employer that your skill level is not limited to where it currently stands and that you will improve at your job over time. Be open with them about where you want to improve so they can provide the right kind of support and you’re not left struggling.

No one is 100% confident going into a new job — but that doesn’t mean you should live in fear. Understand that everyone is human, including you, and — importantly — your employer. Hold your head high knowing that they chose you for a reason.

If you can be fearless in your new role, you’ll tackle every challenge as they come with confidence and perseverance.

So go on: face your fears this Halloween… and beat them!