To kick start our Salary Snapshot Series, we have been analysing Marketing, Digital and Ecommerce Executive Salaries in the North of England. 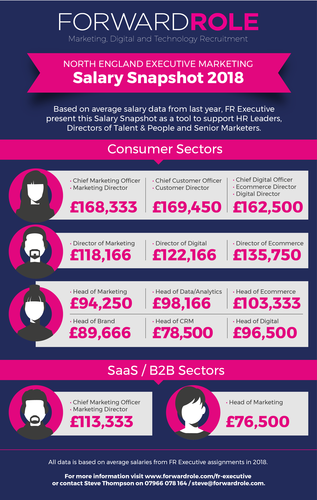 2018 has seen another year of strong growth in the North, with more good news stories from some of its major cities; such as the likes of Amazon, Jaguar Land Rover and Moonpig creating digital hubs in Manchester and of course ITV announcing Leeds as its new home.

Manchester (1st), Leeds (2nd) and Liverpool (4th) have all recently ranked amongst the fasting growing cities in the UK, based on job and population increases since the turn of the century, and with operating costs an estimated 40% less than in London, there is no wonder so many established and young businesses are flocking to the region.

With a landscape of hugely successful high profile ecommerce pure play success stories; such as AO.com, The Hut Group and Boohoo.com and with a plethora of smaller online businesses following their lead, the Ecommerce sector has once again made a major contribution to job creation in the region.

In the multi-channel retail space, large organisations such as N Brown, Findel Group and Matalan have continued to drive large digital transformation programmes and in grocery; Asda, Morrison’s and Iceland are all pushing development of their ecommerce channels hard.

Online travel disruptors like On the Beach and Booking.com and a burgeoning FinTech scene led by the likes of Zuto, Access Pay and Interactive Investor, have undoubtedly had an impact on job creation this year. Whilst more traditional players such as The Co-operative and Yorkshire Building Society continue to transform themselves.

The sum of this means that the Northern recruitment scene has been in overdrive in 2018. Many areas of digital and ecommerce are currently experiencing major candidate shortages and this type of growth has accentuated supply issues in technical specialisms such as analytics, UX, paid search and conversion.

With this as a backdrop, it’s hardly surprising that Forward Role recorded double-digit increases in digital, ecommerce and technology salaries in 2018 across all levels.

Interestingly at both ‘Director of’ and ‘Head of’ levels, the highest paid specialism in 2018 was Ecommerce.

At C-Suite level, a Chief Customer Officer (CCO) / Customer Director earnt more than a Chief Marketing Officer (CMO) / Marketing Director for the first time in our records this year.

Whilst many would argue the roles are one and the same, depending on which business they sit in, the trend towards a senior marketer’s remit being less about broadcasting a message and more about managing experiences and customer and data touch points, probably explains the trend towards the Customer Director job title and comparative salary growth.

A CMO in a consumer business on average earnt circa £55,000 more than in a B2B business, and a Head of Marketing circa £18,000 more in a B2C role than in a B2B equivalent. But there is good news for B2B professionals with salaries in the area up 8.5% at these senior levels compared to 2017 - mainly as a result of the rapid growth in the region’s technology sector and more specifically software as a service propositions.

Steve Thompson is the Managing Director of Forward Role and Executive Search Director for FR Executive. If you’d like to discuss any of the insights in this piece with him, then please feel free to contact him on steve@forwardrole.com or 07966 078164.

FR Executive also work extensively in the technology space, so if you’d like to discuss salary insights in that area, then please call Richard Jones on 07887 511518 or email on richard@forwardrole.com.