What's been happening in the world this week #1

The first full week of 2019 is done! For many of us, Christmas now feels like a distant memory and it’s hard to believe it’s all over.

I’ve actually found getting back into the swing of things much easier than I thought, there’s been a great buzz around the office and lots going on. One thing that has definitely changed though is everyone’s eating habits. What was an endless supply of chocolates and mince pies in the run up to Christmas, has been replaced with salads, fruit and healthy, home cooked meals. Not to mention the amount of people who have signed up to the gym this week. The ‘New year, new me’ mantra is in full swing at Forward Role HQ.

I’ve decided that one of my New Year Resolutions for 2019 is to blog more… hence this post!

I’m going to commit to one short blog per week for the next six weeks, filled with interesting news that’s got the team talking around the office. From things that affect our industry to what’s trending in marketing and on social media. So what’s been going on this week…

Well 2019 has definitely got off to an interesting start – something called Brexit is happening… apparently.

On a serious note and speaking of Brexit, HSBC have had a bit of stick this week for their ‘anti Brexit’ campaign but it was their Manchester themed billboard that caught my eye on Monday. The regionally focused marketing campaign looks at what makes their audience special, with lots of great references to the city. 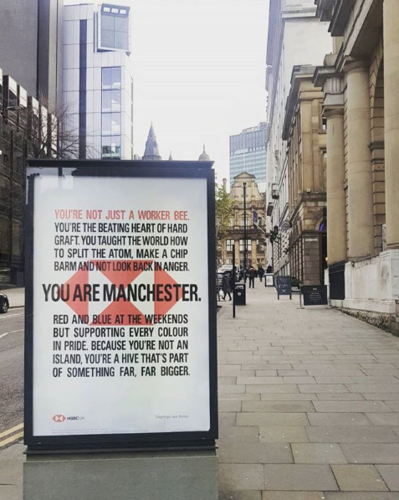 Whilst the HSBC advert has been on everyone’s lips this week there is an advert on the other side of the pond that’s going under the radar. Wall-Mart have produced a fantastic campaign to highlight their new shopping service across the US. If you want a feel-good advert that puts a smile on your face this is it: https://www.youtube.com/watch?v=6G2IG7g4Drw

In other news, China have just landed on the dark side of the moon, sadly no aliens though. This was my favourite article because it’s never been done before! At a time when it feels like everyone is arguing, this story inspired hope across the world and everyone can be proud of the fact that as a species we keep exploring the unknown and that there is always more out there.

Closer to home, we are seeing a record number of candidates looking for new opportunities. This week Forward Role has started recruiting over 40 vacancies, we’ve registered over 100 candidates and have had 100s more CVs to go through! All divisions are up and running and recruiting for both temporary and permanent roles.

If that isn’t exciting enough, we’ve just signed up to attend the Marketing Show North on 27th February. It’s the UK’s BIGGEST gathering of marketing companies, vendors and suppliers held outside London and we’re excited!

In addition to that, we have a number of other events coming up next month – from networking and industry events to recruitment fairs. You can see all of the events coming up on our Events Calendar here.

All in all 2019 looks to be an exciting year and we can’t wait to get it started! As I said earlier, I’ll be putting out weekly blogs on snippets of market information every week so keep your eyes out!