Record VC investment in UK tech; one of three key shifts for 2019

Back to Blogs
posted about 3 years ago By Richard Jones

As a closet techie I am delighted to see the UK tech industry supercharging our economy. VC investment during the first half of 2019 hit a record $5B and despite serious global players we continue to rank third in the world, after the US and China, for the creation of Unicorns (companies valued at over $1Billion).  Then there is the proper head-hurting matter of a government and industry backed £358m initiative to unlock the power of quantum computing. No pressure!

This month’s London Tech Week reinforced the pivotal role the industry has in the UK economy, as the prime minister acknowledged, “British tech is growing over one-and-a-half times faster than the rest of the economy, adding more than £130bn to our economy every year….We want this to be the place everyone thinks of – and comes to – first when they want to develop their world-changing tech ideas. This is a challenge, shared between industry and government.”
Fortunately, the UK tech economy has breadth as well as depth. The 73 unicorns are spread across multiple sectors demonstrating a wealth of capabilities and experience and they are not just in London. According to Tech Nation and Dealroom.co it is more of a collective effort than you may think. 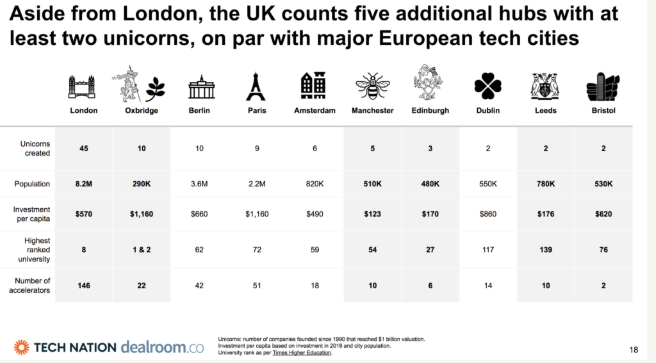 Government Investment
A recent study for the government-led Digital Economy Council, whose members include techUK, Google, Facebook, BT and Apple, claimed that over a third of Europe’s fastest-growing tech companies are based in Britain. Perhaps learning from the financial sectors explosive growth, the government seems committed to ensuring that tech growth in the UK is delivered in a responsible and ethical way. The Digital Economy Council has a clear mission “to develop a Digital Charter that will ensure the UK is the best place to start and grow a digital business, and the safest place to be online.”  In addition to the ethical and inclusive initiatives the government is contributing £153m to ground-breaking  exploration into quantum computing and its role in accelerating drug development.

Nationwide start-up culture continues to feed the funnel
As the investment in the top tier of the tech industry continues to flourish it is reassuring to see that the UK’s tech start-up scene is also seeing rapid expansion.  According to research by professional services firm RSM, in 2018 there were 11,864 software development and programming businesses up from 10,394 companies the year before.

Again, the growth was nationwide although London had the highest number of tech start-ups, welcoming 4,752 (14% increase), every region saw growth except Scotland and the North East.

As a proud Mancunian, it was great to see that the North West recorded 1,079 new tech firms – seeing the biggest rise of all at 48%. The regions are clearly keen to support and drive technical innovation too.

Andy Burnham, Mayor of Greater Manchester: “The digital tech sector is thriving in Greater Manchester and the North West, creating brilliant new jobs and attracting people from right across the country to work here. By building truly innovative businesses, with global reach, Greater Manchester is creating opportunities for the future and is challenging and outperforming many of the world’s fastest growing tech hubs.”

Skill shortage in the tech Industry, so who will deliver it all?
In 2018 one in five of the jobs in the UK was in tech so there is an increasing demand on a finite resource of experienced talent. Training in technical skills and specialist support functions are a critical focus along with a clear need to achieve more diversity but the market growth looks set to outstrip the human resource capability, at least in the short-term. As with any skill shortage two things win out: higher salaries are an inevitable quick fix but, as the millennial generation are teaching us, in the long-term an enriching environment is the real key to building an effective team of tech talent.

The headlines make great reading but what is even more compelling is the detail behind them. The “overnight” success of the tech industry has been decades in the making and it’s the breadth and depth of the UK tech economy that is the real value. A testimony to fact that while most of us ignored the IT department, unless we needed something, they quietly got on with coding the future.

Richard is Executive Search Director at Forward Role, you can read more about him HERE!