Pulling on the Old Boots… The Dirty Half-Dozen

Back to Blogs
posted over 6 years ago By Dan Middlebrook

A bitterly cold Bolton evening bore witness to the inaugural match between the creative colossus of Bring Digital and the recruitment rapiers of Forward Role.

Running a fashionable quarter of an hour late, the Forward Rollers took to the pitch amid a chorus of jeers and boos, (in the writer’s mind). Clad in a rag-tag mix of tops, shorts and boots, from Everton to Man City by way of Didsbury FC, there was a lot of promise if the neon boots and Skins were to be taken at face value.

The game began at a thrashing gallop with Bring pinging the ball round in tight triangles as the newbies of Forward Role struggled to adjust to the quick tempo. Several Forward Rollers appeared to be (mentally) stroking a ball about in the Maracana while the home team adjusted better to the cut and thrust of the English game and the altitude of the Bolton hills.

Two down after five minutes, the Forward Role ship was listing badly, with a number of players chasing shadows, blowing hard and frankly looking panic-stricken. Slowly though the recruiters started to gain some semblance of shape and the tide was stemmed. With the scoreline at 5-2 the game had a period of balance and the teams traded blows in the centre of the park, going goal-for-goal to entertain the lone spectator (FR Brian).

The two Toms in Bring’s midfield were very elusive though and their quick touch and movement on and off the ball was a constant threat, occasionally ripping the heart out of the FR defence. FR Jack and FR Guy were energetic though in their response and put together a number of good combinations with both scoring at the end of some slick passing moves. FR Dan demonstrated the turning circle of an oil tanker but managed to slot a decent effort from distance. FR Matt usually dons a helmet and pads for his favoured game of Gridiron but showed here he had the steel to get stuck in without the armour… good touch for a big man too!

As the game moved into the final third legs began to tire and the superior pace and fitness of the Bring team enabled them to pull away to a 14-6 (?) final score. A well-deserved win for the marketers and plenty of food for thought for Forward Role.

Considering it was the first outing for Forward Role many positives could be taken, and like anything more practice, better communication and greater understanding within the team will improve results. Thanks to the guys at Bring for their competitive but sporting performance, and we hope to give you a better game soon … 'Bring' it on! 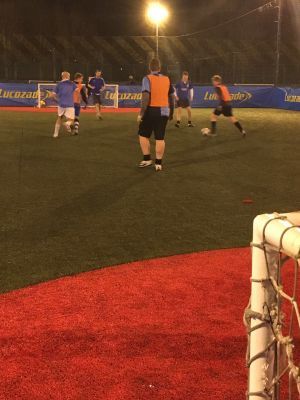