Back to Blogs
posted about 6 years ago By Dan Middlebrook

Last Sunday we arrived in a boisterous, bouncing and mercifully sunny Manchester and made our way across town towards the start point of The Great Manchester Run. I was struck by the sheer scale of the event; I’d heard 35,000 take part, but in addition there’s all the support staff and spectators and it was hard to quantify how that would look at street level. No fear, it was absolutely buzzing!

Decked out in a very bright Forward Role Magenta Pink T-shirt, there was no way anyone was going to miss us! Unfortunately, due to the scale of the event and the fact that my colleagues and I had all put wildly different time predictions, it meant we were all setting off in different waves. 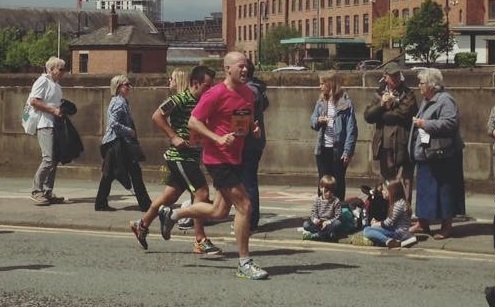 The holding pen for my Orange Wave was rammed a full forty minutes before the start time with a good natured crowd of all shapes and sizes. I wormed my way towards the front, not really knowing if this was a good move or if I’d be the “traffic” for everyone else.

At this point I started to get a little flutter of nerves; I know 10km is no marathon or ultra-distance race but I also know it’s far enough to hurt, especially if you’re going for a PB, which I was. Suffice to say there was an equal measure of excitement and fear in me as the clock wound down to show-time!

The starter gun was fired by Roy Hodgson; I passed him slightly disappointed he didn’t feel compelled to stop and ask me if I could still ‘do a job’ in the Euros next month! Then we were into the jockeying phase, where you try and find the right pace group and settle into your rhythm. It was pretty congested for the first 500-600 metres then started to thin out as I passed and was passed by other runners of differing abilities.

Soon enough though I was in a very nice, almost joyful state; legs pumping, head and chest up feeling confident and inspired by the very vocal support. I was truly surprised and energised by the crowds, the boisterous fun buses, plus the various bands and musical support along the way.

As the first four kilometres fell by, I was in a great mood; the sun was shining and all was good with the world … I was on course to smash my PB with ease! But this was to be very much a game of two halves …

At around the halfway point I felt my heart rate start to climb, my legs get heavier and my breathing faster and more frantic. At 6km I was in real trouble as my fingers began to tingle and my stride started to shorten. The sun was now an impediment as it scorched down on my forehead and salty sweat dribbled in my eyes. I’d gone off too fast and was now paying a heavy price. It’s here that the mental side of running kicks in and my mind started playing tricks on me; “pretend you have an injury”, “fall over” and “JUST WALK!” the little devil on my shoulder slyly whispered, imploring me to stop this living hell. “Just keep going, just keep going …” was my muttered mantra as I tried to exorcise this demon.

We looped again past Old Trafford and came back onto the Chester Road where the streets were lined with generous people urging everyone on and I knew then that quitting wasn’t an option. Surfing this wave of support really helped the last two kilometres and through gritted teeth I was even able to manage a “sprint” finish … although I probably resembled a sunburnt octopus as my limbs flailed in all directions over the last 100m!

But anyway, it was over and I’d managed to slice nearly 30 seconds off my PB, so was pretty chuffed.

I’ve heard that after childbirth a hormone is released that makes a woman forget the pain of labour; a nifty little design of nature that helps to ensure the survival of the species. It may be a stretch to compare a 45 minute race to childbirth, but I think there’s a similar effect in place here. Between the 7 and 8 km markers I’d have happily paid good money for injury to strike me down and let me just walk the rest of the way. Yet only an hour later I’m showered, with a burger and pint in front of me and I’m already thinking about putting in for next year’s event!

I have to say a huge thankyou to the organisers, stewards and all the crowd who came along to cheer us on. If I sometimes appeared a little ungrateful, it was merely that I was in the throes of an internal tug of war between my good and bad sides!

My fellow Forward Rollers all managed to get round well in good times, although some in the later waves had to suffer a classic deluge of Manchester rain. We were all very pleased though to raise over £400 for Forever Manchester; thanks to all those who donated.

Hope to see you there next year …