Salary Snapshot of the Technology Industry in the North of England

Back to Blogs
posted about 3 years ago By Mike Rhodes 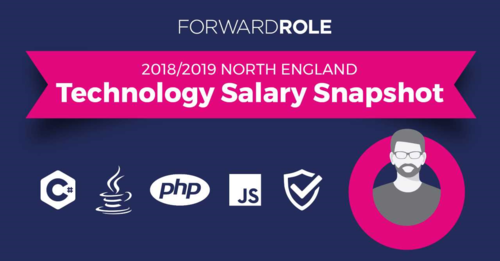 Our Salary Snapshot Series has already looked into marketing and digital roles at an executive-level as well as business-to-business (B2B) marketing roles, giving insight into average salaries across these markets.

Next up is the technology sector - focusing specifically on salaries in the North of England.

The UK’s tech sector is booming, currently employing over a million people and estimated to be worth £184 billion to the UK last year. More specifically, the North is continuing to grow its tech scene and last year Manchester ranked the third top technology hub in the UK, after London and Edinburgh.​

So, what does this mean for those working within the technology sector in the North of England?

Competition for talent is high, with new start-ups and established companies attracted to the region and new businesses announcing a Northern tech base, seemingly on a weekly basis.

The market for permanent development talent continues to be impacted by the appeal of contracting. Tech businesses are fighting against that trend by strengthening staff engagement offerings and the provision of better salaries and packages. The reality is however, there are significantly fewer permanent C# and Java developers when compared to the contract market and this has driven the increase on permanent salaries significantly over the past five years. It will be interesting to see how incoming private sector IR35 regulations effect this dynamic from next year.

Generally speaking, enterprise level software is usually built in Java or C#, and the last couple of years has seen many enterprise businesses, such as Sainsbury’s, MAG-O, Barclays and Moneysupermarket move into Manchester, creating mass competition for Java and .NET developers. Out of the two, Java remains the most in demand language for enterprise scale businesses.

The PHP programming language usually comes associated with a lower average salary, as its most frequently utilised by smaller digital and ecommerce businesses. Work in this field will more often than not, involve a greater focus on web work, as it is opensource. PHP developers can expect to earn anywhere from £26,125 (on average) at a Junior level, right up to £55,250 (on average) as a Lead Developer.

Within the QA market, opportunity is rife, with more and more developers in the region building more applications than ever before. The average salary for Test Analysts (£32,416) hasn’t had much movement, stagnating over the last few years. However add in some automation and things get interesting…

Automation is an area that has been on the rise for the past few years with salaries averaging £47,533 last year. Developer in Test is an area that is extremely sought after and quite lucrative in the market, with salaries averaging £59,857. Manchester in particular has a significant skills shortage for permanent Developers in Test. As a result salaries for this will most likely continue to soar over the coming years.

Mike Rhodes is the IT Recruitment Lead at Forward Role. If you’d like to discuss any of the insights in this piece with him, then please get in touch on mike@forwardrole.com or 07789 512 321.